So I stumbled down a rabbit hole the other day ended up on an old reddit post that got me thinking about solo oracles, such as the commonly used "yes/no/and/but" and "percentile chance" systems. Could the stats of a d20 game be converted into their own oracle without the use of an external one? And how much information could be eked out from a single roll? Any information offloaded onto an oracle reduces the creative load on the player. I decided to try and mash together ideas from Flesh of the Tarrasque with the above post to see if I could make a preliminary draft of something along the lines of oracular stats.

To start, take six d20s, preferably physical, but digital tabletops with visual representations could work. Roll the handful of you have onto the table - these are your adventure or world stats (depending on if you're running a story or a sandbox). Leaving the dice where they land, first record the values (range of 1-20) then write next to them relevant modifiers (-3 to +3, extending the end ranges if necessary). These represent the basic stats of your adventure or world. 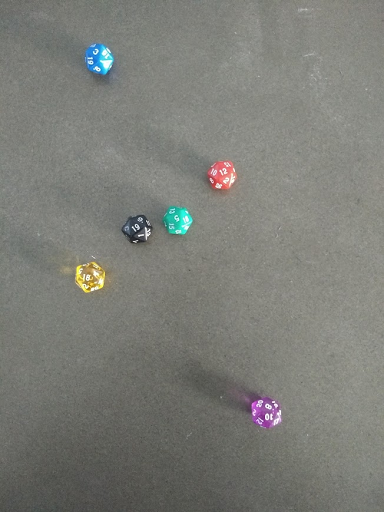 That could be interpreted on a kingdom with strong military (Str) and sorcerous (Int) factions battling it out at the expense of the populace (Wis), which is ravaged with sickness from said warfare (Con). The mediocre political leaders could be easily manipulated by these powers (Cha), but nonetheless are relatively "flexible" and progressive with policies despite their ineffectiveness (Dex).

Next, look at the dice from left to right - this is your temporal axis. Whether a larger entity or NPC, this indicates the order in which the events in the entity's life - and thus, its stats - developed. For example, in the above roll the first this to develop would be a military presence, hence implying this was originally a military splinter group from another kingdom who took charge. Soon after the sickness emerged and  the sorcerers showed themselves from the shadows, which resulted in all out civil war. The political leaders in the community finally took action, trying to implement progressive policies but it was too late - the kingdom closed itself off from the rest of the world and the leaders became mere puppets of the military and sorcerous factions, which brings us to present day.

Finally, look at the stats from top to bottom gives an indication of importance of the factor in the setting or NPCs life. Continuing on with the example above, it is the sickness that dominates the mind of an average citizen within the kingdom, followed by the civil war and progressive policies being middle, while the societies leaders are seen as ineffectual and are often the last thing a citizen would care about.

The importance of the modifiers comes when creating entities within the larger superstructure, with these nested entities stats being affected by the stats of the level above. For example, a city or a noble within the kingdom would naturally be affected by the external circumstances surrounding them, hence applying the modifiers to their own stats rolls. You could nest these stats infinitely based on the level of granularity you could go to.

Once you've created and recorded some basic facts about elements in a given entity, then comes actual play where the stats start to serve as oracles for the player. For any question, first ask the question, choose the stat most relevant to the question, check to see if any stats would override that stat to apply a modifier, then roll a d20. Any roll equal to or below the stat means the answer of the question should be interpreted as trying to achieve the aims of that stat. For example, a character with a higher strength would be more likely to attack someone than one with weaker stats. But if his charisma is higher than his strength, it is possible he may take a charismatic approach before a strong one, hence the modifier being applied.

For one off NPCs or larger entities, you could simply use the superstructure. For example, simply roll on the kingdom stats to see how your average Joe/Jane would react to something instead of rolling every stat for them anew. Of course the answer of every question should be interpreted with the context of the question, and based on the stats of other entities.

Here are some example questions that could be asked for the strength stat:

-How solid is the city wall the dragon is trying to burn (city str 10)? Roll 9, the wall holds against multiple attacks from the beast, giving you time to run.

-What does the letter from the Assassin's Guild say (guild cha 5, overridden by wis 15 -> modifier of +1)? 6, it states that despite the slights made against them as long as the noble doesn't show his face in guild territory again, bygones will be bygones.

Admittedly this limited to classic d20 stats. Maybe it could be mapped onto other systems as well? Most games I've found have a stats basis of some form, its just a matter of expanding those stats to a larger scope. Or maybe the dice needed and the eventual nesting of stats will become more cumbersome than its worth. Who knows?